The thickness of the Bible reveals that salvation is not just as easy as eating peanut – this is what I learned when I was in the midst of reading it verse by verse.  Salvation, unlike what others think about it, is a process where faith, work and endurance are very much essential to finish this process. Faith without work is dead and work without endurance is in vain. Salvation is a course that everyone who desires it must have a serious decision. The book of Hebrews stated,

“Now the just shall live by faith: but if any man draw back, my soul shall have no pleasure in him.” (Hebrews 10:38) 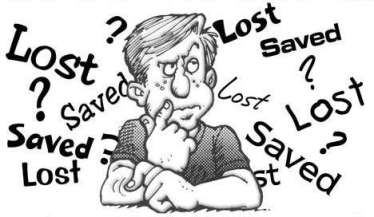 This is the reason why I’m wondering to those people who, at the very day they allegedly accepted Christ as their Lord and personal Savior, so easily declared that they were already saved. The Bible is a book full of righteous principles and commandments of God where our faith must be rooted in. And by faith we must live  first upon all these precious teachings, and not just with some five or six verses often read by many evangelical preachers. Paul said,

Moreover, brethren, I declare unto you the gospel which I preached unto you, which also ye have received, and wherein ye stand;

By which also ye are saved, if ye keep in memory what I preached unto you, unless ye have believed in vain. (I Corinthians 15:1-2)

Believing is not enough for us to be saved. You need to live and endure on what you believe. While it is true that we can have the assurance of salvation even today, assurance is always depend on how we live upon the gospel. Living upon the gospel shows that we are saved, but to cease means loosing from salvation. There is no such thing as “eternal security”. Our salvation will be secured as long as we live upon the condition taught in the gospel. Christ said,

“Then said Jesus to those Jews which believed on him, If ye continue in my word, then are ye my disciples indeed;” (John 8:31)  And then Paul states,

“Wherefore, my beloved, as ye have always obeyed, not as in my presence only, but now much more in my absence, work out your own salvation with fear and trembling.”  (Phil. 2:12)

“For I am now ready to be offered, and the time of my departure is at hand. I have fought a good fight, I have finished my course, I have kept the faith: Henceforth there is laid up for me a crown of righteousness, which the Lord, the righteous judge, shall give me at that day: and not to me only, but unto all them also that love his appearing.” (II Timothy 4:6-8)

As long as man cannot overcome his weaknesses, he can’t say, ‘I am saved.’ “It is not he that putteth on the armor that can boast of the victory; for he has the battle to fight and victory to win. It is he that endureth unto the end that shall be saved. The Lord says, ‘If any man draw back, my soul shall have no pleasure in him’ (Heb. 10:38).  If we do not go forward from victory to victory, the soul will draw back to perdition. . . . God’s holy law  is the only thing by which we can determine whether we are keeping His way or not. If we are disobedient, we are not in harmony with God’s moral standards, and we are deceiving ourselves if we say, ‘I am saved.’ No one is saved who is a [deliberate, habitual] transgressor of the law of God.

“Let us hear the conclusion of the whole matter: Fear God, and keep his commandments: for this is the whole duty of man. For God shall bring every work into judgment, with every secret thing, whether it be good, or whether it be evil.”  (Ecclesiastes 12:12-13)

Many religious people today claim that they are true Christians, yet these people are foremost in spreading some errors condemned by the Bible or not biblical in its nature. Strange kind of gospel has been introduced in this age which aim is to destroy the credibility of the word of God and His reputation as an infallible God. Often that His goodness was mis-interpreted by the religious preachers thus church members are becoming too old and passed without knowing the fullness of God’s will. One of the prominent false teachings today is denying of the importance of the Law of God; a teaching declaring that since we are in the period of God’s grace and that faith is essential to attain salvation, Christians doesn’t need the Law of God anymore. By misquoting biblical texts, these preachers indoctrinate the people on how to attain salvation without emphasizing the importance of God’s law in their life. Hence, God declared in His words, “I am profaned among them”.

A government without law is dull. The ruler rules absolutely according to his desire, and the people act the same as the ruler. But God is a God of order, and He don’t want His people to live in a harmful freedom that today’s preachers are actually injecting to their flock. God’s law is the foundation of His government not only on earth but originally in heaven. Christ in His prayer declared;

“Our Father which art in heaven, Hallowed be thy name. Thy kingdom come. Thy will be done in earth, as it is in heaven.” (Matthew 6:9-10)

The law of God is the will of God. David said; ” I delight to do thy will, O my God: yea, thy law is within my heart.” (Psalms 40:8). When we invited Christ in our heart, the same way we are letting the government of His Father to rule within us, and as David said, we should be delighted to do His law.

Many Evangelicals and Born-Again preachers are using the argument that God’s law is so much difficult to fulfill. They ignorantly say that no one can fulfill the law since everyone is a sinner, hence Christ came into the flesh to fulfill what His people cannot fulfill, and by faith alone in Him, we are becoming partakers to what He fulfilled. Then they finally declare, “We don’t need the Law or do any good work in order to attain salvation. Faith alone is the key to salvation”. Oh my friends! These are definitely lies. John the Beloved stated in his letter;

The commandments of God are not grievous unlike what false preachers taught. In fact, it is the duty of man to fear God and keep His commandments. First of all, He created us and loved us. The love of God persuades us to follow His commandments, because by following His commandments we are preserving the life He had given to us. Ignoring the law of God is ignoring the Creator, and making ourselves nonsense. Secondly, there will be a judgement and we will be judged according to our deeds whether it be good or evil.

“Let us hear the conclusion of the whole matter: Fear God, and keep his commandments: for this is the whole duty of man. For God shall bring every work into judgment, with every secret thing, whether it be good, or whether it be evil.”  (Ecclesiastes 12:12-13)

Many people misinterpreted the law as grievous and impossible to be fulfilled. It is because the law is of spirit and many people are of flesh. No way that flesh will satisfy the law neither anything that belongs to spirit. God knows it, so He made an extraordinary thing enable the people to fulfill what the law states. Of course, He will never give any commandment that impossible for man to obey. God is the Provider and He is also the Sustainer. He gave the law and He provides the way to fulfill it. No one can fulfill the law, unless he will be directed by God. Paul said;

For what the law could not do, in that it was weak through the flesh, God sending his own Son in the likeness of sinful flesh, and for sin, condemned sin in the flesh:

That the righteousness of the law might be fulfilled in us, who walk not after the flesh, but after the Spirit.

By faith in Christ, we are all resurrected into spirit  from being dead in the sinful flesh. And now that Christians are resurrected as children of God in the spirit, we can now walk according to the spirit, according to the law which is of the spirit. Christ is not against the law neither He came to abolish the law. He came to establish the law and to seal it by the His precious blood.  Jesus Christ stated,

Paul said, “For the wages of sin is death” and “sin is the transgression of the law.” (Rom.6:23; I John 3:4) All people have sinned so we must die according to the law. But Christ came into the flesh, putting all our sins unto Himself and died in our stead. The death of our Lord shows the immutability of the law; it shows how powerful are the words written in the law. Now that Christ freed us from the curse of the law because of our own transgressions, we can now freely walk into a new form of life, a life saved from the wages of our past transgressions. Is it mean that the effectiveness of the law lost its ground? God forbid. John said, “sin is the transgression of the law”, so the existence of sin signifies the existence of the law. Thus Paul declared in his epistle;

” Let not sin (transgression of the law) therefore reign in your mortal body, that ye should obey it in the lusts thereof.

For sin shall not have dominion over you: for ye are not under the law, but under grace.

What then? shall we sin, because we are not under the law, but under grace? God forbid.

Know ye not, that to whom ye yield yourselves servants to obey, his servants ye are to whom ye obey; whether of sin unto death, or of obedience unto righteousness?” (Romans 6:12-16)

God never gave us the license to sin or to transgress the law after we had saved from it. Why? Because if we sin, we are placing again ourselves as slaves of what we are doing. We are freed, so we should not go back to those sins that enslaved us in the past. We’re already freed so we can now freely turn ourselves as slaves of God’s righteousness. In short, a man who had been freed from sins, from the curse of the law, and now placed under the power of God’s grace is a person who walks away from making sins. He doesn’t kill, he doesn’t worship idols, he doesn’t steal, he doesn’t covet, he doesn’t lie, he doesn’t commit adultery, and if there’s anything that can separate him from God, he walks away from it. A person who had been saved from sins is a person who walk harmoniously with the commandments of God as what King David said, “Depart from me, ye evildoers: for I will keep the commandments of my God.” (Psalms 119:115.  And again, John  the Beloved said;

“Whosoever committeth sin transgresseth also the law: for sin is the transgression of the law…

He that committeth sin is of the devil; for the devil sinneth from the beginning. For this purpose the Son of God was manifested, that he might destroy the works of the devil.

Whosoever is born of God doth not commit sin; for his seed remaineth in him: and he cannot sin, because he is born of God“(I John 3: 4,8-9).