Just as our prayers which sometimes cannot be uttered are manifested as “groanings,” likewise this unspeakable joy is manifested in overflowing laughter. Joy in itself is a quality that cannot be measured in the laboratory, but just as we can see the tree limbs swayed by the invisible wind, we can also hear the “joyful sound” [Ps. 89:15] in the laughter of the saints.

This was an excerpt I have read from a website that defends  a newly strange teaching regarding the so called “Holy Laughter”. Holy Laughter is a phenomenon during which a person laughs uncontrollably, presumably as a result of being filled with the Holy Spirit’s joy. It is characterized by peals of uncontrollable laughter, sometimes accompanied by swooning or falling down to the floor. First-hand accounts from those who have had this experience vary somewhat, but all seem to believe it to be a sign of a “blessing” or “anointing” of the Holy Spirit.

In Argentina in the 1980’s Jimmy Swaggart was holding a crusade. During that crusade “literally hundreds of people…would begin to laugh hysterically and throw themselves down on the ground. They would howl like dogs…they would roar like lions, they would make all kinds of wild sounds, and when these thing began to happen, the ushers went and physically restrained them, took them out of the coliseum to a tent outside, and they cast the Devil out of them.“ 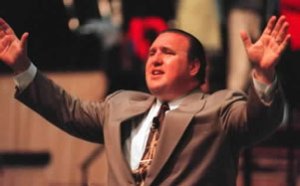 Howard-Browne.  Some have referred to him as a Christian Rodney Dangerfield. Some refer to him as the “laughing evangelist,” Rodney M. Howard-Browne calls himself a “Holy Ghost bartender” who promotes “laughing in the Spirit.” This latest champion of the Charismatic movement tells a lot of jokes and rattles off one-liners before encouraging people to let the spirit flow “out of the belly” in holy laughter.

To be sure, Howard-Browne has popularized the current wave of hysteria but this so-called holy laughter is really nothing new to our 20th century. It was practiced by fringe Pentecostals such as Kathryn Kuhlman back in the 60’s. Many who have sought to support it biblically have claimed it is a manifestation of Biblical joy. Nothing could be further from the truth as we will see when we look at Biblical joy later. Instead of joy, it could and perhaps should be called pandemoniumism. The dictionary definition of “pandemonium” is very interesting. It reads, Wild uproar or noise. The word comes from the epic poem Paradise Lost by John Milton. In that poem Pandmonium was the capital of Hell. Further, it is interesting that the word is based on a compound Greek work made up of pan who was the Greek Nature god and daimon (the English word is demon).

These spasms of laughter, which can last as long as an hour, are contagious. The South African-born Howard-Browne tells his audience: “Fill — let it bubble out your belly — Ho-ho, He-he — Fill — Ho-ho-ho, Ho-ha-ha.” It sounds like pandamonium when thing get going. Let me change gears and move on.

Think of HELL for a moment. What comes to your mind? Luke 16:19-31 gives us a picture of the horrors of Hell. It is certainly nothing to laugh about. But…Not even the consequences of a Godless eternity are immune from his laughter. “Charisma” magazine reports: “‘One night I was preaching on hell,’ Howard-Browne says, ‘and [laughter] just hit the whole place. The more I told people what hell was like, the more they laughed‘” (August 1994, pg. 24).

Who in their right mind would laugh about Hell? Not Holy Spirit filled Christians!

Let me ask you a question — Should people follow a preacher who threatens to commit suicide if God does not meet his demands?

My answer is NO! God is not a terrestrial genie waiting our bidding. We are to seek HIS will not demand our will. Psalm 143:10 Teach me to do thy will; for thou art my God: thy spirit is good; lead me into the land of uprightness. But RHB (Rodney Howard-Browne) does not hold that view. “In July of 1979…Rodney M. Howard-Browne of Port Elizabeth, South Africa, reached a crossroads in his life…while at an interdenominational prayer meeting with about eighteen young people at this time, he cried out to the Lord, ‘God, either you come down here tonight and touch me, or I’m going to die and come up there and touch you.’ he began shouting, frightening nearly everyone that was present. He shouted for 20 minutes…” (An article entitled “History of the Revival” by Richard M. Riss). It is clear that this is not the biblical way to approach God! King Solomon of old put it this way — Let us hear the conclusion of the whole matter: Fear God, and keep his commandments: for this is the whole duty of man. Ecclesiastes 12:13

Let’s consider another illustration of his teachings. RHB said, “As long as something is happening it really does not matter if it is of God, of man or the devil.” If that is not enough to impeach the credibility of this spurious prophet, let me read you his words from The Coming Revival —

“But I’d rather be in a church where the devil and the flesh are manifesting than in a church where nothing is happening because people are too afraid to manifest anything. Every time there is a move of God, a few people will get excited, go overboard, and get in the flesh. Other believers will get upset, saying that couldn’t be of God. Don’t worry about it, either. Rejoice, because at least something is happening. …If someone comes in the meeting, rolls around on the floor, laughs in the Holy Spirit, or does it in the flesh, at least he’s not getting drunk or taking dope” (pp. 6, 8).

Wait just a minute, is that Biblical doctrine? Hardly! If you are going to worship God you must worship Him Biblically not carnally. You cannot operate in the flesh and please God (Psalm 4:4; Romans 8:8). In this Howard-Browne is weighed in the balance of Scripture and found wanting.

The most convincing Scriptural argument against what is called “holy laughter” is found in Galatians 5:22-23. It says: “But the fruit of the Spirit is love, joy, peace, patience, kindness, goodness, faithfulness, gentleness, self-control; against such things there is no law.” If self-control is a fruit of the Spirit of God, how can uncontrollable laughter also be a fruit of His Spirit? Revival leaders claim that being “filled” with the Spirit means that we are sort of “tossed about” by His whims. But the idea that God would make people act drunk, or laugh uncontrollably, or make animal noises as a result of the Spirit’s anointing is directly opposed to the way the Spirit acts, according to Galatians 5:22-23. The Spirit described in Galatians 5 is one that promotes self-control within us, not the opposite. Finally, there was no one in the Bible more filled with the Holy Spirit than Jesus, and not once does the Bible ever record Him laughing.

There is another aspect to Christian joy — that is the joy and rejoicing that results from steadfast confidence in God regardless of one’s circumstances. When a person walks with the Lord, that person can continue to rejoice even when troubles come because he knows God is in control and that this life is not the end. Consider the words of our Lord in Matthew 5:11-12 Blessed are ye, when men shall revile you, and persecute you, and shall say all manner of evil against you falsely, for my sake. 12 Rejoice, and be exceeding glad: for great is your reward in heaven: for so persecuted they the prophets which were before you.

A Christian can be joyful even when he/she is emotionally sorrowful and even when his/her spirit is heavy. Consider the proof from the Bible.

2 Corinthians 6:4, 10. But in all things approving (demonstrating) ourselves as the ministers of God… As sorrowful, yet alway rejoicing…

Acts 5:40-42 And to him they agreed: and when they had called the apostles, and beaten them, they commanded that they should not speak in the name of Jesus, and let them go. 41 And they departed from the presence of the council, rejoicing that they were counted worthy to suffer shame for his name. 42 And daily in the temple, and in every house, they ceased not to teach and preach Jesus Christ.

1 Peter 1:6-8. Wherein ye greatly rejoice, though now for a season, if need be, ye are in heaviness through manifold temptations: 7 That the trial of your faith, being much more precious than of gold that perisheth, though it be tried with fire, might be found unto praise and honour and glory at the appearing of Jesus Christ: 8 Whom having not seen, ye love; in whom, though now ye see him not, yet believing, ye rejoice with joy unspeakable and full of glory:

We must not make it our chief aim in this present world to seek after the shallow, emotional frivolity this world identifies as joy, or we will be severely disappointed. Like Jesus, “who for the joy that was set before him endured the cross” (Hebrews 12:2), the child of God must set his face like a flint to endure the manifold sufferings of this present life with his eyes focused on the unspeakable joy which is to come.

If you do not have REAL, BIBLICAL JOY in your life, don’t run out to the nearest meeting offering “holy hysteria.” Examine your life. It may be that sin has robbed you of the joy you should be experiencing as a Christian.

After you have read this article, I recommend you to watch the following videos. A very shocking documentary proving that Satanism has being practice among some Evangelical and Charismatic groups.